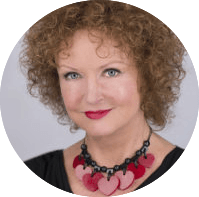 The most experienced dating guru in the UK, Mary Balfour ran her multi-award-winning, London-based matchmaking agency Drawing Down the Moon for over 30 years.  With her team of experienced consultants she found soul mates for thousands of time-scarce, single professionals. She still retains an interest in the agency, now headed up by the amazing Gillian McCallum.

Author of Smart Dating: how to find your man (shortly out in its third edition) Mary also shares her field-tested dating strategies and tips via her YouTube Dating Success Channel.  Many singles seek Mary’s guidance as dating mentor and coach. She’s given Smart Dating Seminars at Waterstone’s bookshop in Piccadilly, the Groucho Club and other London venues.

As a seasoned guest of TV and radio she talks with passion about the wider issues of relationships and the dating industry.

Mary originally studied photography at the London College of Printing and later acquired a sociology degree and PGCE teaching qualification from London University.

Pursuing her passion for learning more about relationships and how to help people maximise opportunities in life, she obtained a certificate in Counselling Attitudes and Methodology from the Westminster Pastoral Foundation and a Certificate in Life Coaching from Newcastle College. After training with the Redwood Women’s Training Association she taught Assertiveness Skills and Women’s Sexuality.

Mary takes a lively interest in the arts and was one of the founding trustees of Riverside Studios in Hammersmith in her original name of Gráinne Palmer. She worked for many years as head of an inner-London adult education centre.  In the eighties she moved on from this to embrace her lifelong passion for matchmaking, full time, with Drawing Down the Moon.

The early days of her multifaceted career also embraced working as a commercial photographer, a fashion model, a PA to a film producer, a tour guide, founding a community-run children’s nursery, school and youth club.

She’s been very happily married for thirty seven years to her husband, Sebastian Balfour, Emeritus Professor of Contemporary Spanish Studies at the London School of Economics. Living between North Kensington and West Sussex they also spend time with grandchildren in Rome and Brussels as well as in Catalonia, where they have a house in the mountains.